In July we were quite happy to have a quick trip to Germany to celebrate the 60th wedding anniversary of Johannes and Bärbel Weissler in Erlangen. (Johannes’ father Fritz and Robert’s grandfather Otto were brothers.) We took the opportunity to make a little “pre-trip”.

[Click here to skip the narrative and go right to the photos. 🙂 ] 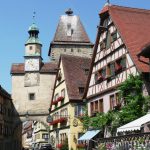 Rothenburg did indeed ooze charm, as well as adorable Steiff teddy bears, even at the height of tourist season and in the heat. We enjoyed our stay at the Altfränkische Weinstube (another Rick Steves recommendation), just a bit off the main drag, and managed to be comfortable in our “Bauern Stube” suite despite the lack of a/c.

Leaving Rothenburg we picked up a three-day bike tour in Würzburg, (mostly) along the Main on a fine bike path. The route took us first to Lohr am Main, then Wertheim (every bit as charming as Rothenburg), before returning to Würzburg. This mini-tour was similar to a big Mosel trip we did a couple of years ago, except this time a bike touring company (contracted through Mecklenburger Radtour) booked our hotel rooms and transferred our bags each day, so all we had to do was ride and carry a day-pack. It was pretty hot the first day, then cooler and threatening rain the next two, but all in all it was a fun trip. We’re quite interested in other tours this company offers – just not in July! 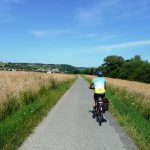 When the bike tour concluded back in Würzburg – a slightly longer day than anticipated due to an unexpected detour to get over/under the A3 autobahn! – we hopped a train to Erlangen, where the next day we met up with Familie Weissler. It was a great opportunity to see the small but far-flung family and other friends. With Johannes’ great-grandson Rasmus there, four generations were represented, quite the photo!

And the big group photo! 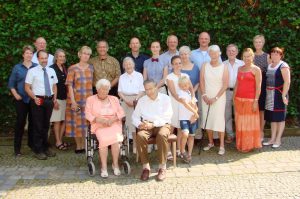