Bhutan was on our bucket list for some time – east of Nepal, squished between China and India, it is a country of Gross National Happiness, Himalayan beauty, unspoiled forests, and – most importantly for us – it is a birder’s paradise. In April/May of 2015 we joined Victor Emanuel Nature Tours for a 3+ week “trip of a lifetime”.

Now, those who know us know we travel a lot and have been to many exotic places…including India, east Africa, South America over the years… but truly, Bhutan takes the prize. Following is Liza’s trip report; tour leader Steve Hilty’s report and bird list is linked below (the report is a good read!).

Note: if you want to skip the narrative and go right to photos and maps, click the following links:

We started our trip as most do, flying into New Delhi, India to join the small tour group (7 participants total). The group then flew on Druk Air via Kathmandu, Nepal to Paro, Bhutan, where the airport approach threading thru canyons has to be the most exciting we have experienced. (Reportedly the pilot has to commit to the approach about 50 miles out – and he did warn us that seeing the mountains so close was quite normal and not to be alarmed.) The full group for the 3 weeks was then all together – bird guides (Steve Hilty and Ansar Khan), 1 Bhutanese guide (Ugyen), and a driver and a camp crew that outnumbered us.

Our general itinerary took us east from Paro, through the capital city of Thimphu (the only world capital without a single traffic light), to Trongsa and as far as Yongkola, eventually returning to Trongsa and heading south to Gelephu on the Indian border. The majority of the trip was between 7500 and 10000 ft elevation, with a couple of higher passes, Chele-La said to be over 13000 ft. Prayer flags, gorgeous rhododendrons, and orchids were in abundance as we traversed through the forest types, from deciduous broadleaf trees up to pines, firs and hemlock. It was not until we were on our way to Gelephu that we dropped to lower elevations, in fact we were not out of the Himalayas until about 5 miles out of Gelephu when the mountains ended abruptly and gave way to the Brahmaputra flood plain.

We stayed at a number of nice hotels and lodges/guesthouses, with 7 nights of camping interspersed. Our highest camp was at over 10000 ft, but we were comfortable at all camps in our walk-in tent with cots, foam mattresses and warm bedding. (Even then we were happy we had each brought an extra silk sleeping bag liner, and Liza appreciated the yak wool blanket she bought from an enterprising vendor at the top of one of the passes – and granted there were a few days where Liza felt she had on nearly everything she brought with her.) We even had a solar-powered light in the tent with a USB port to charge electronics.

The camp crew did a stellar job of making/breaking camp, but more importantly, they kept us well-fed and well-hydrated…maybe too much so. (Going out of the tent for a leak in the cold at midnight, not always fun, but you do what you have to do.). The meals they conjured up were amazing; breakfast consistently included porridge, eggs, cheese, french fries, and sausages, accompanied most days by toast, sometimes pancakes…with a lot of peanut butter, honey, and mango and strawberry jam. Field lunches and dinners were always 4-6 courses, including red or white rice, an array of vegetables (potatoes, cauliflower, okra, radishes, green beans, and yellow lentil dal), plus a bit of chicken, pork, or fish, all in interesting sauces.

Spring rolls made an appearance a few times. They managed to make mushroom pizza one night, which was eagerly requested again, and produced a cake the last camp night too! We also had the classic Bhutanese chilli cheese – ema datshi – with our meals, a totally killer hot chili/cheese dish that I could barely eat and Robert gamely incorporated into everything on his plate. (For more about chilli cheese, see my food blog post here.)

Mornings and arrivals at camp or hotels, we were always greeted with “tea coffee biscuit” (cookies for those not familiar with British biscuits). We enjoyed some good Druk 11000 “super strong beer” many nights, too, but skipped our opportunity to try a Bhutan red wine (“made with the finest Indian grape juice”).

Lest you think all we did was eat, drink, sleep, and bird, there were some opportunities for cultural enlightenment. We admired the unique and remarkably consistent architecture, with the ornate, detailed painting adorning the eaves and window frames. The propensity to paint “phalluses” on houses was a little eye-opening…larger than life and adorned with ribbons, always shooting something. We visited the impressive dzong (fortress) at Punakha, and had beautiful views of the dzongs at Paro and Trongsa. Across the valley, we saw the famous Tiger’s Nest monastery perched precariously on a slope near Paro, but did not have time to hike the 3 hours up the side of the mountain to reach it. We saw many such impressive structures sprinkled throughout the mountains.

The rhododendrons and orchids were blooming and gorgeous, but it was also pretty interesting that marijuana was growing seemingly everywhere. And as far as we could tell, nobody cared. Literally the only time we caught a whiff of that characteristic aroma was once when someone seemed to be burning it to clear a field. 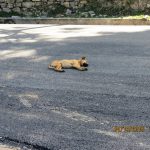 About 700,000 people live in an area about the size of Switzerland, mostly Tibetan Buddhists. There might be as many stray dogs there too, the barking dog chorus at night in the cities of Paro and Thimphu can get a bit loud. (And the dogs aren’t limited to the cities; at every camp or field breakfast/lunch it would be literally minutes before a few dogs would show up hoping for a meal.) On the bright side, the dogs all looked fairly healthy. Given a belief in reincarnation and maybe that dog could be your grandmother, not to mention nobody believes in killing anything, the dogs are fed by folks, and more importantly, drivers avoid them – just as they avoid the numerous yak and cattle.

Speaking of driving, we were happy to have such an experienced driver. Except for one fairly recent bypass, the roads are tortuous, with relentless switchbacks up to passes and back down to river valleys. The roads were narrow, basically one lane with a little room to pass here and there. The few places where a dividing line was painted semi-optimistically, the road resembled a good bike path more than anything else. Any the crow flies distance seemed to translate into twice that distance driving – at about 15 mph max.

Landslides and closures for road work are the norm, but we were not inconvenienced – although a few times the mud we drove through, so close to a precipitous edge (guard-rails who needs ’em), was a little disconcerting. The road work, by the way, is largely done by Indian nationals who live in national work force camps; men driving heavy machinery and women doing a lot of work by hand while the kids play nearby; it is undoubtedly a tough existence.

Of course, we went for the birds. The group overall saw well over 300 species, ranging from difficult little warblers through colorful flycatchers and laughing-thrushes all the way to you can’t miss these guys hornbills. We also had good looks at many mammals, not just yak, but also himalayan black bear, macaques and golden langur monkeys, and interesting squirrels. We can’t complain, but we missed a few things we had hoped to see, specifically Ward’s and Red-headed Trogons. We may just have to go back!

As for shopping – you knew Liza had to get *something* – Bhutan is known for textiles and weaving. Besides the yak wool blanket, we brought home a number of hand-woven raw silk scarves, and Liza also bought some checked fabric typically used to make standard Bhutanese attire. We also indulged ourselves in New Delhi with the purchase of a rug (shipped home and arrived the day after we returned home, and immediately cat-approved), as well as a couple of fine embroidered pashmina shawls. So if we don’t get back to Bhutan or India any time soon, we have some nice things plus a lot of photographs to remind us of what an awesome journey this was.

One final trip note – yes, we did feel the Nepal earthquake. We were far enough away in eastern Bhutan that we noticed the gentle rolling (most notably the ceiling fan swaying) for 15-20 seconds, but no sharp jolt or windows rattling. We were astounded and saddened to hear of the damage and loss of life in Nepal, and to see photos of the devastation – truly awful.

For a full complement of photos plus maps, see the links below.