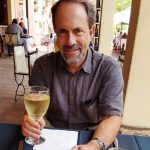 In November we returned to Argentina for birding (not to mention a little wine-tasting), this time to the northwest to the provinces of Salta and Jujuy, followed by a quick trip into Uruguay. Robert will be writing a detailed birding account; following is a general summary of the trip.

Click here to skip the narrative and go straight to the photo galleries.

We started out with a couple of days on our own in the city of Salta. We stayed in the center of town near the Plaza 9 de Julio and visited the local sights, including the fine Museum of High Altitude Archaeology. We also took the cable car up to the top of Cerro San Bernardo and got a jump start on our birding as we walked back down.

The following day was a very enjoyable day trip (courtesy of Mendoza Holidays) through the Quebrada de las Conchas, eventually getting to Cafayate for a wine tasting and lunch. Love the white Torrontés wine!

The birding trip started in earnest the next day, as we met up with Marcelo Gavensky of Birding Buenos Aires and our local guide/driver Carlos Cuñado Strelkov. We traveled north to the province of Jujuy to our first destination, the EcoPortal de Piedra, run by Carlos, wife Sylvia, and son Carlito. The EcoPortal had its own private reserve located next to the Sierra de Santa Bárbara; here two types of forest can be found, a dry subtropical forest (Montane Chaco) and a montane rainforest (Yungas forest). We explored this area both on foot and with a transfer to higher elevation by ATV.

Leaving the EcoPortal de Piedra we visited Calilegua National Park, staying overnight in the small town of San Francisco. From there we continued to the west part of the Jujuy province, stopping at the Potrero de Yala Provincial Park, staying overnight in nearby Reyes. The general theme was going ever higher and drier. We entered the pre-puna (high Andean foothills) landscape around Tilcara at over 8000 ft, staying at the charming Reposo del Diablo. We then headed up past Iturbe to the puna (high treeless plateau) landscape of Abra Pampa at 11430 ft. After a detour to the Laguna de los Pozuelos, we went even higher to Yavi (11535 ft), then crossed several Andean passes over 15000 ft in the Sierra de Santa Victoria before descending to Santa Victoria Oeste (7874 ft) in the far north-central corner of Salta.

En route to Santa Victoria, along a graded gravel road with many switchbacks (ably driven by Carlos in his Land Rover), we stopped to bird at Abra del Lizoite at just over 15000 ft, and at one of the passes probably were approaching 16000 ft. No running at that elevation! We did see a couple of vehicles overturned and down-slope from the road, too – we were happy Carlos was such a careful driver.

We didn’t quite get into Bolivia, but our phones did – roaming in as we went through the city of La Quiaca, on the Argentina/Bolivia border.

The general trip plan for the last few days had to be hastily rearranged due to our noon flight out of Salta back to Buenos Aires being too early to begin with to make it back in time, a situation not helped when LATAM rescheduled the flight to 0900. We cut short our stay in Santa Victoria, and made our way back through Abra Pampa back to Salta overnight before flying out the following morning. Big thanks to Marcelo for being able to make the changes at the last minute!

Back in Buenos Aires, we killed some time at the Puerto Madero port (nice restaurants, shops) before taking the Buquebus ferry across the Río de la Plata to Colonia del Sacramento, Uruguay. Colonia’s historic center is a UNESCO world heritage site: “Founded by the Portuguese in 1680 on the Río de la Plata, the city was of strategic importance in resisting the Spanish. After being disputed for [more than] a century, [alternating between Spanish and Portuguese rule, it finally became part of the Oriental Republic of Uruguay after independence]. The well-preserved urban landscape illustrates the successful fusion of the Portuguese, Spanish and post-colonial styles.” (Read more here: http://whc.unesco.org/en/list/747.) We very much enjoyed walking the lovely historic center, as well as just relaxing after really a very tiring birding trip at our inn the Posada de las Terrazas (highly recommended if you visit there).

A 3-hour, $13 per person bus ride took us to Montevideo, where we concluded our trip. (And have to say, that bus was more comfortable than any of the aircraft we flew in. Special disdain for the Boeing 787 Dreamliner with 9-across seating configuration!)

Montevideo has a number of interesting neighborhoods, including Playa Pocitos (where we stayed), and the Ciudad Vieja (old town). The Rambla along the beach is lovely, with 22 km of broad sidewalk, a bike path (which walkers respected), playing fields for kids and adults alike (soccer, rugby, cricket), and of course the beach. Many people out at dusk taking a stroll, jogging, cycling, playing – a lovely atmosphere.

We couldn’t be in Uruguay without some extra birding, so we had a pleasant day out to the west of Montevideo with guide Adrian Antúnez of Guyrapyta Birding Tours. Adrian took us to Playa Penino and then to Colonia Wilson. We flew out the next day via Lima back to Los Angeles, eventually returning to Arizona. 🙂 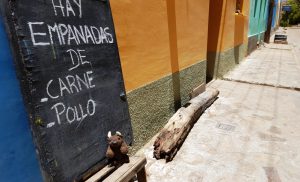 A few additional musings … Marcelo joked that his tour should be called Birds and Empanadas of Argentina. We love empanadas to begin with, and while we had them often on the birding tour, it seems no two places made them the same. Baked or fried, beef or chicken filling, everyone had their own touch. And to get them, sometimes you just had to drive around until you saw that someone had posted a sign outside saying “Hay empanadas hoy” – there are empanadas today – and voila, lunch.

Dogs are everywhere in Argentina, even in the most unlikely places. We could be on a gravel road at 10000 ft, get out of the car to bird, and a dog would appear at Robert’s side. Probably hoping for a bite to eat. Dogs barked a lot at night too (Liza used her earplugs). In Abra Pampa, she was happy not to hear dogs – but the silence was short-lived when sheep outside started bleating. Baaaaaaaaaa! Dogs were abundant in Uruguay as well, but at least in Colonia and Montevideo, they were on leashes and looked more pampered.

Elevation didn’t seem to be a big issue, perhaps because we live at 5000 ft, and the route took us up gradually to the high puna. Robert did have a slight headache one day, but the wind could have been a factor as much as the elevation. We ate the coca candy as it is supposed to help (that’s our story and we’re sticking to it).

We didn’t have issues with food or water either – meaning no intestinal woes – we were our usual careful selves, of course, but did at times eat the salads and drink the tap water. Nice to know that wasn’t a problem. For more on food and drink, click here to visit Liza’s food blog.

Again, for more photos (including a bird gallery, and photos of Buddy Bison), click here.