We’d wanted to return to Spain since our 2009 biking adventure there, and finally made it back this April. This trip combined a number of activities – birding in Extremadura (west and southwest of Madrid), cycling, seeing the sights in Madrid and Barcelona, a few days in the quieter city of Girona, and a drive on the Costa Brava.

If you want to skip the narrative – it’s long! – and go right to photos, photo galleries are here:

The trip planning started with the intent to bird Extremadura and grew from there. We flew into Madrid, and after a whole day to acclimate 🙂 we enjoyed a fun one-day bike tour with Bike Spain that included visits to San Lorenzo de El Escorial and to the walled city of Ávila. The weather was colder than we anticipated and there was plenty of snow up on the high peaks, so our thought of revisiting the Puerto de Navacerrada climb was replaced with the visit to Ávila.

Just before reaching Ávila we had a lovely (and big) lunch just outside the city, and in Ávila itself enjoyed the local specialty of yemas, basically an egg yolk candy. (Now Liza knows what to do when she has leftover egg yolks from making meringues!)

A day in Madrid spent walking and visiting the Palacio Real was followed by the start of the birding tour. It was raining pretty good that day so the group – us, three Brits (John, Rob, and Derek) and our guide Jesús – simply made the long drive out to Quintana de la Serena in the heart of the La Serena plains, and tried to banish thoughts of “the rain in Spain falls mainly in the plains”.

Birding focused on the Extremadura plains and the Monfragüe Natural Park, known as one of the best birdwatching areas in Europe and the last stronghold of some of Europe’s rarest and most endangered species. Robert will write up the birding in more detail, but suffice it to say here that we had wide-open vistas, wildflowers in abundance, and incredible views of raptors (including Spanish Imperial Eagle, Eagle Owl, Black Vulture, and Griffon Vulture), and equally incredible views of grassland birds (including Great and Little Bustards in the open fields). And not too much rain.

We stayed three nights in Quintana de la Serena, a quiet community, then the following four in the walled city of Trujillo. Trujillo was the birthplace of Francisco de Orellana (European discoverer of the Amazon) and Francisco Pizarro (the conqueror of Peru … not beloved in Peru as much as in Trujillo). Trujillo had a lovely Plaza Mayor that was gearing up for an annual cheese festival, which started just after we left. 🙁

We returned to Madrid after leaving Trujillo, spying the iconic Osborne bull along the motorway en route, and met up with Arizona friends Linda and Jerry. We explored museums, had a couple of big lunches at El Caldero and El Rábano restaurants, visited the Mercado San Miguel, and checked out some Basque pintxos (tapas) on the Cava Baja.

From Madrid we whisked ourselves off to Barcelona on the fast Ave train. We had bought goodies to enjoy on the train – some bread, jamón ibérico, cheese, wine – but as it turned out we had “preferente” (first class) train tickets. The wine (and sparkling cava) was free-flowing and they fed us as well, so we held our goodies for that night at the hotel. (Just as well – the cheese, a fine Torta del Casar from Extremadura, was rather ripe, and we might have been thrown off the train if we had eaten it there!)

So, Barcelona. Well, the obvious big sight is the Sagrada Família, and it did not disappoint. We’ve visited many fine churches and cathedrals but this one takes the prize. Faith and nature combined by Antoni Gaudí into an extraordinary building that is still under construction and due for completion in 2026.

Gaudí’s art is visible in other parts of Barcelona to be sure -including Park Güell and lovely buildings in the Eixample district including Casa Batlló. But there’s also Montjuïc, with a fine Catalan Art Museum and views of the city and harbor; Las Ramblas, the pickpocket trap for the unwary (we were fine); and the old town districts of Barri Gotic and El Born with narrow streets, the “original” cathedral, markets, and the Picasso museum. In the El Born district we lucked into a food/wine fair outside the Santa Caterina market, so lunch that day was wine tasting and tapas grazing at the various food/drink stalls. And shopping.

(By the way, if you plan to visit Barcelona, pick up the Rick Steves’ pocket guide to Barcelona. Indispensable and easier to carry/hide than the bigger guide books.)

Still with us? More activities to come! We had a lovely guided day-trip out to Montserrat. Very good deal we thought, transportation, visiting the monastery and surroundings, followed by lunch, winery tour, and wine tasting at Oller del Mas winery near Manresa. One *could* visit Montserrat on his/her own, but you’re at the mercy of the train, cable car, and funicular operators – two of three of which were on strike the day we were there (1 May).

Leaving Barcelona, the four of us continued northeast to Girona, a less touristy but pleasant city closer to the Costa Brava. We stayed at the beautiful Montjuïc B&B; our rooms had terraces that overlooked the city, not to mention the panorama of the Pyrenees, just the thing to relax on after our whirlwind of activities. We rented a car and had a day of driving to the coast, where we visited the impressive Greek and Roman ruins at Ampurias (aka Empúries), had a lovely lunch in L’Escala at a restaurant run by a British ex-pat and her Spanish husband, and swore we’d never rent an Audi A4 again with its goofy sensors and incessant false alarm beeping. (Thank you, Robert, for driving.) We thought we might get to Figueres or Cadaqués, but that was a bit optimistic for one day. And we thought we might drive out again the next day, but opted for a quieter morning in Girona instead, visiting the Arab Baths and exploring the Jewish quarter. We’ll have to go back to the Costa Brava someday – without an Audi.

From Girona it was back to Barcelona, with one last meal near the Plaça de Catalunya and an overnight at the spiffy modern Hesperia Tower hotel near the airport…then home. 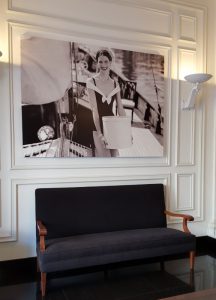 And a random note about nothing … Liza wants this bathing suit (photo from the lobby of the elegant Hotel Granvia, Barcelona).